The additional advantage of ADOB® Zn(NH4)2 EDTA – 9.3% is that the product is also sodium-free, which is especially important in greenhouses and areas with higher salinity. Consequently, there is no risk of sodium build-up, while at the same time the nitrogen contained in the product (N-NH4 at 4.0% w/w) is fully plant-available. This product serves as an effective source of zinc and is mainly recommended for foliar application, hydroponics and fertigation. It is recommended for preventive and corrective fertilisation in all agricultural and horticultural crops.

Zinc is present in a large variety of enzymes, where it contributes to maintaining their structural stability. In addition, zinc works as an external activator for other important enzymes and is involved in a number of important functions in DNA and RNA metabolism, cell division and protein synthesis. It is crucial in the metabolism of the auxin indole-acetic acid (IAA), which enhances the apical growth of plants. Zinc deficiency is widespread among plants grown in highly-weathered, acid soils and in calcareous soils. In the latter case, zinc deficiency is often associated with iron deficiency (lime chlorosis). The low availability of zinc in high-pH calcareous soils is mainly due to the adsorption of zinc to clay or CaCO3.

Zinc deficiency causes various physiological disorders, such as stunted growth (“rosetting”) due to the shortening of internodes, drastic decrease in leaf size (“little leaf”) or, under severe zinc deficiency, death of shoot apices (“dieback”). Quite often these symptoms are combined with chlorosis, which is either highly contrasting or diffusive (“mottle leaf”). In cereals such as wheat, typical symptoms include reduction in shoot elongation and the development of whitish-brown necrotic patches on middle-aged leaves, while young leaves remain yellowish-green and show no necrotic lesions. ADOB® Zn(NH4)2 EDTA – 9.3%, however, quickly corrects zinc deficiency, treating the above-mentioned physiological disorders. 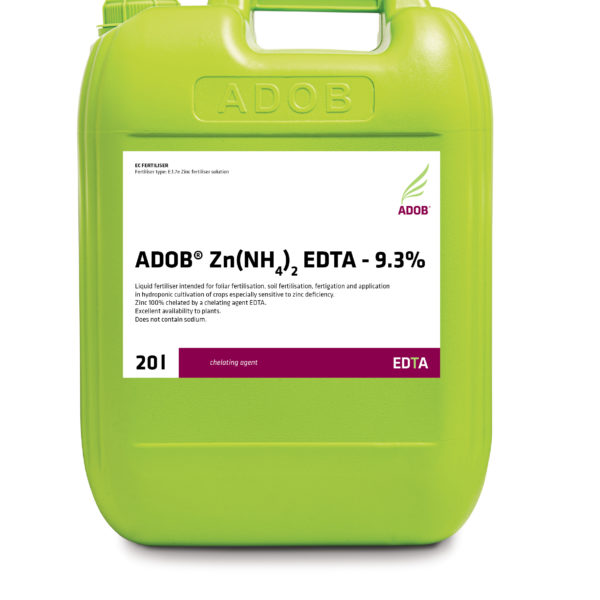